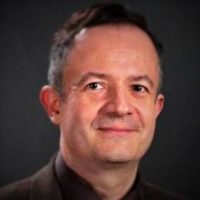 Tihomir Živić performs courses in the scientific field of Philology. He evinces his scientific interest in the areas of American Studies, as well as in the Digital Humanities, Literary Criticism, and Translation Studies. In his capacity as a college professor, he was charged with the duty of a Vice Dean for Development and Professional Affairs (2008 – 2012), presided over the Chair in Core Courses, and headed the Center for Lifelong Learning (2009 – 2013) at the College of Applied Sciences Lavoslav Ružička in Vukovar. As a Fulbright alumnus, he was scientifically post-educated in the US and was professionally post-qualified in the FRG, Ireland, and Hungary. Doctor Živić is a member of a number of Croatian professional associations and of the DARIAH-EU ERIC’s Ambassadors’ Network. He is also an associate of WiRED (World Internet Resources in Education and Development), a nonprofit organization headquartered in Montara, CA.

• awareness-raising opportunities in the (geographically relatively proximate) non-EU and non-DARIAH communities (e.g., in Bosnia-Herzegovina and Macedonia), with the significant but mostly marginalized, i.e., undigitized, (monastic and other) repositories and the emergent educational, practical, and scholarly needs in the spheres of arts, computerized infrastructure, content management, and Digital Humanities (DH);

• an impactful advocacy, information dissemination, and regional outreach with regard to the DARIAH objectives, e.g., by virtue of an alternative, novel, and versatile event organization that would promote a digitally enhanced research in the arts and humanities, a sustainable knowledge acquisition, and an intra-communal cooperation to minimize the expenditures (especially in the academia but also beyond it).

By continuing to use the site, you agree to the use of cookies and google analytics. more information